We are slowly starting to find balance here in Crazyville. After my freak-out last week about never being able to stitch (and thank you for humoring me in that moment), I figured out that I may have to change  my perspective on what I consider an accomplishment in stitching. Perhaps I won't be able to do the large complicated pieces, at least not quickly, but I can still do small pieces, like ornaments, while she is napping. And, if it takes longer, who cares?  It's not like I am missing out on anything; the time spent with Babygirl is precious, since she changes so fast and stitching will always be here.

We have finally, I think, gotten her situated as far as all the things that go into becoming a legal person here in the US.  I finally got her Social Security number this week, I took her up to the Health Department in Metro Crazyville for her birth certificate as well. That was a pleasant experience, actually, it took all of 15 minutes to be out the door with her certificate. I KNOW! They have changed a lot in 36 years, at least here in Maryland. No more doctor's signature on the bottom, not as much information on the certificate, it was interesting. She is enrolled in "school", now we just have to go "school shopping" for her stuff for there--crib sheet, diapers and wipes and formula for just there, and a hat.  Her gramma bought her a hat last weekend, but it will be a while til it fits her, LOL  I even finally got her signed up for health insurance. She should be good to go and we can enjoy this week. I'm off work til September 1st, so it will be fun to have the time with her.

One more cute pic of her to share, since my camera battery needs to be charged to do photos of my stitching.  Left-brain's cousin took this one, and I think it's so beautiful.  One of my stitching friends already turned it into a chart for me, and I'll stitch it to remember how tiny she is.  Hopefully, I can share progress on that one soon.
Posted by Rachel S-H at 7:33 AM 5 comments: 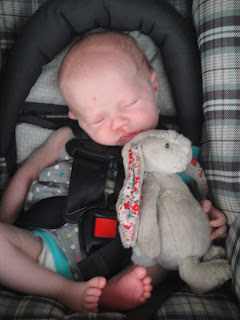 I realized yesterday that I haven't posted photos of Babygirl since those early ones! She is growing and stretching and becoming a big girl! This weekend was her two week birthday.  I celebrated by buying her this bunny, which is perfectly-sized for her. I didn't realize when I bought it (but the price should have been a clue here, and the store I bought it from), it's from a "luxury" stuffed toy brand.  Did you realize there are such things?  Oh well, he has the sweetest facial expression, and is quite cuddly, and she can put her arm around him in a pinch. She has learned his ears absorb spit-up quite well and that his face can be sucked on, but it doesn't work as well as a binky.  But she does love Bunny, and I think they are a match made in Heaven. 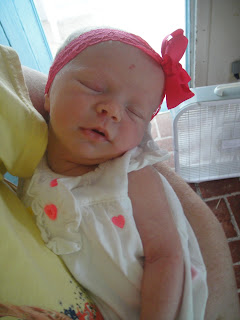 Saturday was her aunt's birthday. We had a cute onesie about aunts, but we decided this was a better party frock! Especially since she was not eating crabs like everyone else--crabs and white clothing do not go together! Her bow was a huge hit, even though, like most of the rest of her wardrobe, it's a little big.


Left-brain had an old tarp laying around the garage and he took advantage of the hot weather to set up a "redneck slip and slide" for my neice and nephews (OK, the aunts and uncles were on this too, those of us not healing from a c-section), and Beazer joined in. 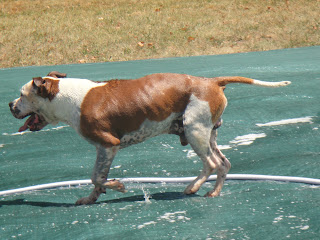 No, he did not slide, he just supervised and made sure that the kids were behaving. And he drank a bunch of water out of the hose.

He is such a good big brother. He checks on his sister constantly. He was outside this weekend a lot because he was wet, and kept coming to the screen porch to make sure she was OK. If he couldn't see her, he FUSSED and whined. Just now, she was crying, and he came up and gave her a kiss. To her credit, she does not scream, she just lets him do it. They are a duo.  We've only had one slip-up, he got a hold of her rattle, a stuffed pony, and was starting to chew on it.  We still have to work on identifying which toys are hers and which ones are his, but one slip up is not bad.
Posted by Rachel S-H at 7:32 AM 7 comments:

I am sorry that I have been away so long. We are still adjusting to Crazyville's newest resident, which is going well, all told; we're a little tired, and rolling through laundry, but she is the most wonderful loving little soul.  I bought her her first toy (at least post-birth, LOL) for her two-week birthday on Saturday. I just loved how sweet it looked, and it is something she can cuddle, now that she is starting to interact with her world. Beazer is becoming her ardent protector; he runs through the house to check on her when he comes in, and gets so agitated if he can't see her. She seems to like him too; he gave her a kiss on her cheek and she didn't fuss (think about it, that has got to be pretty scary, seeing that big old head coming at you, but she is pretty brave).

Anyway, I ordered the special JCS Halloween issue last week, and it came.  I have to say, this is the best issue of any magazine I have seen in a long time. And that includes Christmas magazines, British magazines, ALL OF IT.   If you love Halloween, this issue is a must-have. It is not part of the regular subscription, more the size and feel of the Christmas issue, but it is so good. Lots of really cute little ornaments, perfect for my tree. I have already decided that I will stitch the Mosey n Me ornament for Babygirl, for her first Halloween, and I love the Tempting Tangles ornament. And not only that, there are larger designs in case you aren't an ornament stitcher. Sharon Pope's designs are great; I love the black cat she did.

Maybe I am asking too much, thinking I can keep stitching with an infant in the house. I have been stitching a little since she came, mostly while I watch her sleep, but it's not like I was before. I have to admit, last week, I seriously thought about just getting rid of all my cross stitch stuff, thinking it would be easier to not do it than to look at it, know it's there, and not have the time to stitch. And then I decided I was freaking out because I hadn't had enough sleep, and decided to just give it some time. When I can, I can stitch, and maybe it's time to focus on small pieces, not the big ones, and, otherwise, just enjoy being with the baby.  I do plan on using this time off to finish some ornaments, especially since I can't go back to work til September 1st; I think I can get quite a few done during nap time.
Posted by Rachel S-H at 7:15 AM 6 comments:

The rhythm of my heart

And here she is: 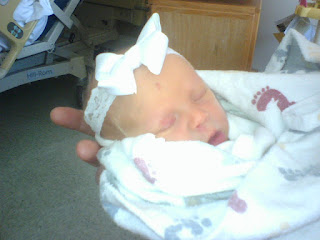 I woke up on Sunday, after a very short nap--I spent most of the night Saturday awake because I was afraid it was a dream--and she was looking at me with such love, like I was wonderful. But I know she's wonderful. I adore her.
Posted by Rachel S-H at 4:12 PM 29 comments: