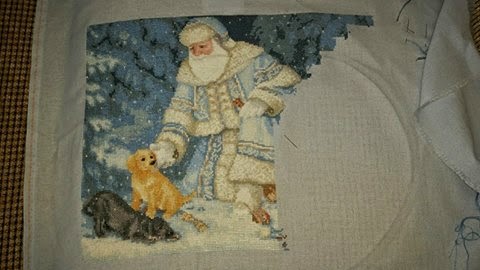 Not much to report this week. I had a small finish last week, which I'll try to finish-finish this week and post. I'm toiling away at Santa's Pets. It sort of feels like being in the doldrums; there is progress, but not much, and I'm too far in to abandon ship, and the finish feels so far away . . . My plan is to stitch on this for the rest of the month, then work on Halloween stuff next month, and then spend the rest of the year making sure this is finished by Christmas Eve. It sounds like an achievable goal, I think. I just need to get out of this sea of blue and white!
I did happy dance yesterday because I finally sent in the last payment on my hospital bill from Kaydence. Yep, I officially own a sassy toddler. To celebrate not having to shell out $125 every month (there are a lot of issues behind this, I don't mind paying money I owe, but I was given bad information by a rep from the insurance company at the time, and the payment processing company, I had to call every 3 months and make sure that our math matched--spent three hours sorting it out. One of those things no one ever says is because of them), I bought 4 charts from 123. I ordered "Fancy Blackett--The Harvest Dance," "Spring Hare", and "Why I Believe".  AND . . .  because I learned from not ordering the mice when they come out, I ordered "Miss Witchy Mouse." I know the last thing I need is more stash, but I liked them and, now that I get some breathing room til the next crisis comes around, I took advantage of it. Apparently these mice are not hard to assemble. I shall give my review of them.
I did stop in at Hobby Lobby last night on my errands last night. I was kitting up my Miribilias for the Panting to Stitch SAL, and one that I just want to do. They had the fall stuff out, and Copper Fox had posted a little fox dish she got there. I went to looking and this little guy, well, he just begged to come home with me. I love his little bushy tail!  They had other things that I liked, but I decided to skip them for now. Maybe next month, after I finish paying off my car . . . 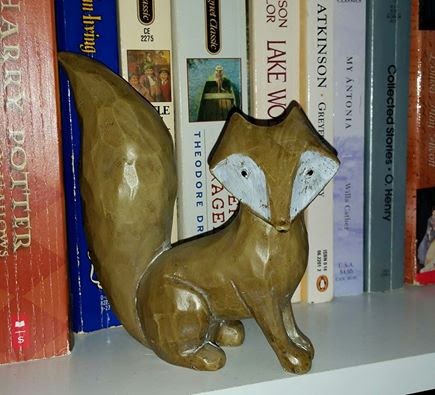 Anything as smart as a fox would want to protect my classics!
I was a little miffed that they close at 8. I got there at 7:40, and didn't have enough time to get all my floss, but that's OK, I'll save it for another trip. Weird that they close at 8. Who does that?  But then again, who gets the urge to craft at 8:30 at night, and you never see anyone at Michaels that late . . . I guess they figure if you want to shop HL, get up early.
So that's all from here. It's a busy week ahead. I work both days this weekend, but I'm OK with that!
Posted by Rachel S-H at 7:15 AM 5 comments: Links to this post

The "Panting to Stitch" SAL

Thank you for your comments about my post the other day. They are much appreciated. Things seem to be looking up for September.

You are probably wondering why I have titled today's post what I have, since this is not a hobby we tend to "pant" about.  Well, in all my digging through my stuff the past month, I realized that I have a lot of stuff that I would really like to stitch before I leave this earth, but I haven't been able to work on. In my case, it's because I lose everything all the time, but I'm sure I'm not the only one who has these projects. Well, I decided I'm going to change that in 2015.

I already committed to focusing on Hummingbird Trellis afghan, and that will be my focus for the year . . . BUT . . . I decided I am also going to do one of my "panting to stitch" projects. And I found mine the other day.

It's "Mother's Arms", by Miribilia. I have had it in my stash since 2000 or 2001, and I even remember buying it, at Inez's Creative Stitchery in Kensington. (I don't even know if the shop is still there, I haven't been able to go back since that one time, right after Inez died, it was so much "her", hard not to see her at the register). I loved the bright colors, and the serene look on the mother's face (perhaps it calls to me now because I am not a serene mom), but it had blending filament and beads, and so I put it away for that day when BF didn't seem so irritating, and I had money for beads (because, at that time, I wasn't making much, and whatever I did earn went to pay the vet bills for one puppy and three kittens, all of whom seemed to get sick or need shots or shred their collars right around payday), so I tucked it away.

And now I found it, and I think it's amazing. And I want to stitch it. I posted on 123 asking if anyone else had charts like that, that they'd put away waiting for the perfect day and reason to stitch, and got a lot of responses. So I decided to host a Stitch-A-Long. And I've gotten some good responses.  Having referenced putting things off to stitch in the perfect place, like a cabin or seashore, with a frosty beverage, maybe a pool boy or two, I've even offered to post pix of pretty places to help us get into "the zone." Someone suggested basing it out of here, but I'd probably want to set up a Facebook page, or a different blog, and then of course, cross-reference to a monthly post on 123 where people could post photos.

Do you have a chart like that in your stash? It doesn't have to be one to set the world on fire, it just has to be one that you really love, but haven't stitched. Would you like to join us? It's a no-frills, no-pressure SAL, starting January 1, running at least the year. With progress posts on the 15th or 16th to keep us moving.  If so, let me know, and I'll figure out the logistics
Posted by Rachel S-H at 7:10 AM 4 comments: Links to this post