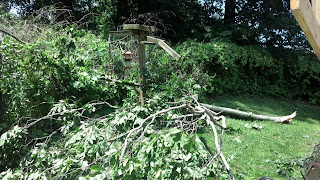 I haven't been around much. We've been getting ready for Someone Small's first birthday, which is in a week and a half. Left brain rehabbed our deck in preparation for the festivities--the deck on the house is the original one and needed a lot of repairs. It had been damaged in Hurricane Irene when a branch came down on it, and it wasn't baby-proofed. He repaired it and expanded and added a place to put a little swing for Someone Small. We looked at new furniture, but decided that we're not spending more on the couch for outside than he spent on the couch for the inside and we'll put off that purchase.

And then the above picture happened. Thursday morning, terrible storms rolled through Crazyville. Left-brain was home, because they'd forecasted a derecho, and we didn't want to have the baby in daycare and both be stuck down-county and unable to get home to get her. He said it just turned black and descended. Quarter-sized hail, terrible winds, and this fell. It missed the deck, thank Goodness, but took out our back fence, and our bird-feeder (it's still standing, obviously, but it was sunk in the ground with concrete, and that's cracked and two of the birdfeeders had to be replaced). Left-brain said he stood, watching the cars out the front window, worried sick. None of them got damaged, surprisingly, blessedly; our friends can't say the same, their brand-new minivan (hadn't even made a payment) has so many dents in it, it's not fixable and will probably be totalled. Our roof is apparently badly damaged, and needs replaced, since there are holes in the shingles, the flashing around our skylights is toast, and there are holes in the gutter guards and screens.  There are also some big trees that need to be removed because one of these days, we're not going to be so lucky with them missing the house. And that would suck.  My tomato plants are pretty badly battered, but we'll just have to take a wait and see with them if they recover. It figures, I was proud of them and they were surviving.

The adjuster is supposed to be out looking at it today.   Left-brain did finally say we'd put in a real garden next year at the side of the house. It's going to be a project to rabbit-proof it, but if the fence needs replaced, we might as well try to fence it in. All this is not what we need right now, not when I start working from home on Friday, and with the party next week, but it is what it is. We can't have that fence down, can't have holes in the roof.
I did start a new project, a design from an old magazine, called "A Kitten for Christmas," by Pamela Kellogg. I plan on mounting it on a stocking for myself, but that may change. It's a lot of color changes, but I'm finding it moves quickly.

So that's what's up in Crazyville. After the birthday, I'm hopeful things will slow down for the summer. Fat chance, right?
Posted by Rachel S-H at 6:50 AM 2 comments: Links to this post

Growing up, my parents grew daffodils. Exclusively, daffodils. Thousands of daffodils. They grew so many, the neighbors have started going in their yard, digging up the bulbs and stealing them. I am not kidding you. Who does that?

My grandmother grew peonies. We apparently bought them for her as Mother's Day gifts over the years, and they line the walkway to her house. She was fiercely protective of them. No one got a cutting from them. I asked my mom if I could have a cutting off one for my house. She gave me a dirty look and said no. But they were a gift from me!

When I got disposable income, I bought tulips for the house. And lavendar. Apparently tulips are not easy to grow, but there are lots out in front of my gramma's house. Not in the organized manner I thought to put them in. One year I had this wild idea to do the colors of the Maryland flag, in rows. Gramma planted them while I was at work, mixing in the yellow and white and red and deep purple/black with fuschia ones. Oh, yeah, looks good. I sought solice in my tulip bulbs after she died--the night after I came home from the funeral, I planted some. It was cold and probably confusing to see me outside in the twilight, digging holes and sticking bulbs down, but my family let me alone. I think I radiated the need to make something beautiful after seeing my family destroyed in an instant. They're still there, they still grow, they've been thinned by the squirrels, but are still there.

At our house, I planted more tulips (I am ashamed to say I didn't plant any this fall), and some gladiola bulbs from Walmart, and more lavendar, along with crocuses. I also tried planting things in pots. I am not a pot gardener, apparently--is that a good or bad thing, I get so confused--because my potted plants have not done so well. The gladiola are OK, the tulips are fine, the crocus grows, the lavendar died. I told Left-brain we have poor soil. Since the house was a rental house before he bought it, no one really took care of the yard and nurtured the soil, and all it grows well is rocks. If we are stuck here, (one of these days, I'll post an explanation about that) that will become a project.

But the one thing I want to grow is food. Our yard is not set up to have a veggie garden. The back yard is shaded and is the domain of Beazer. And rocky. Plus, we have a rabbit warren in the bushes along side the fence and I didn't want to do anything that would encourage them to come into the "Backyard of no Return" (it pains me to admit my dog does and has been know to kill small animals, but, I mean, he's a dog, and a terrier, it is his mission in life). And our front yard is the bunny superhighway. I attempted to plant tomatoes in the ground, and what the bunny didn't eat, just up and died. What I planted in the topsy turvy, got sheared off at bunny-level. At the end of the season, Left brain asked me what I wanted to do with the Topsy Turvy.  I told him to chuck the dirt in the swamp and toss the Topsy Turvy, what a waste.

But I crave a garden. When we look at houses, I look for room for a garden. It's not about a great kitchen for me, it's about the garden!  Left-brain looks at me funny, knowing I am not one to be out there with a shovel, digging up dirt, but he listens and pays attention. All I want in a house is a front porch (or a back one), enough bedrooms for a sewing room, and room for a garden.

So I planted this year. And I realized that our stoop is perfect tomato climate. Sunny for most of the day, and, although our bunnies are brave, they are not coming up on the stoop. And so I have 15 tomato plants, a pepper plant, and an herb garden in pots up there. Initially, I felt like a goober for planting stuff out front--for some reason, I picked up the notion the front yard is for pretty, the back is for everything else--but they're growing and, seriously, who cares? they've survived longer than the ones in prior years. I may get some salsa by the end of summer.  Or at least enough 'maters to serve with sliced mozzarella.

Good luck to us all with our planting.
Posted by Rachel S-H at 7:49 AM 3 comments: Links to this post