Somehow, somewhere, I got some stitching time this weekend.

Right after Christmas, our storage hassles came to a head. Left-brain couldn't get to the desk in the office because of the stacked boxes in there, and I couldn't get to anything of mine. It was starting to really annoy both of us, so we reconfigured his mancave. A lot of my boxes are now downstairs, but I can get to them easily and they are no longer a towering death trap, where the heavy things seem to be on top and everything I need is in the bottom box. Our goal, as stated before, is to build a shed, even though I don't know how that's going to work because they just re-did our flood maps and my side yard is even more in a flood zone than it was before, and I don't want our shed in a flood zone. But, when we do that, we're moving all the man toys out there, all the exercise equipment that is downstairs out to the garage, and the area where that is now will be my stitching area/the baby's play area. Maybe then, I can get some real shelves and a suitable table set up. Barring us moving to another house/having another baby/who knows what else happening in the meantime.

But I pulled Waxing Moon's No Scaredy Cats out of my Crazy 15 starts from 2011:

My progress has been abysmal:


But between Downton Abbey Season 2 on Monday, the "Gold Rush" finale on Friday night (that show is like watching a flipping trainwreck, but it's strangely addictive), and then a marathon of DA Season 3 on Saturday, during which Babygirl slept, I got a lot of progress. It's probably 2/3 finished, but I still have her sign to do and her head. And I love it. I did change the cat on her shoulder to a tabby/calico looking cat, just to be different, and it's cute.  I don't know if I'll do the pumpkin necklace for her though. I don't want to buy the charm, and I found out small things that dangle attract fingers that pull (and I'm not talking children's fingers). Not sure how I will finish this. Maybe as a cube, but then again, I may be able to rustle up a small black frame from somewhere. My mom is starting to be on the lookout for frames at rummage sales and the like, and, since those will be starting up again soon, I may be able to find what I need.

I will post a picture when I get a little more progress on it. I wanted to do it last night, but Babygirl was either teething or so tired she couldn't sleep, because she stayed up, fussing, til midnight. Makes for a very tired Mummy, that does. And she was not any better this morning. No fever, nothing obviously wrong, just disgruntled. But she was fine when she got to school, so hopefully, it will pass.
Posted by Rachel S-H at 7:43 AM 1 comment: Links to this post

I was so productive this weekend. More than I think I've been since I had the baby.


I attacked the mountain of laundry that has been growing in our hallway for a while.  We're just too busy to keep up with it. Now it's all done. It feels so good to have that out of the way.

I also did a deep cleaning of Babygirl's room: put away all the baby clothes she's outgrown, corralled a bunch of cards that had escaped my efforts to put them in her treasure box, along with her christening bib and booties, arranged all the stufties by her bookcase and made sure her library was neat. I have decided she gets a new book for each holiday and there've been enough of those that she is amassing a nice collection.  Valentine's Day brought her "Love, Splat", which she seemed to enjoy.

I also made this recipe! I must confess, I found it through www.pinterestfail.com, which is usually not a good recommendation for a recipe, but I figured it couldn't be that hard . . . and I used store brand Oreos in case it didn't turn out right. But it did. They are yummy. They are rich and indulgent and not that hard to make, and they taste like chocolate cheesecake. My only tip is keep them small, because thof the richness, and use a spoon to dip the almond bark, it's just a lot easier to deal with. 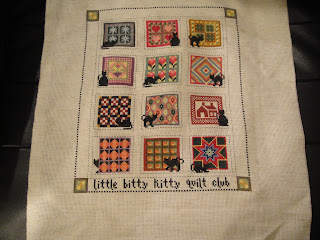 Today I spent the day watching Season 2 of Downton Abbey.  I got through 7 episodes before it was time to do something else.  Babygirl was at daycare--I thought long and hard about whether or not to keep her home, but it's good to have some consistency to her schedule, and I needed time to get other things done, so she went; I know some people may think me a bad mom for doing that, but I have a clean house and a rested spirit for my day, and that makes me a better mom, at least I think.

I finally managed to finish something today. Two things actually. I finished the above pattern, which I started on 1 January 2012. It gives me immense pleasure to have finished it, although it was supposed to have been done by the end of December.

And I started and finished this little guy: 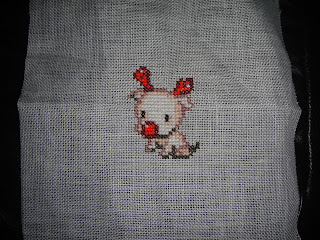 I'm participating in an ornament SAL, and this month's theme was reindeer. I wasn't sure what pattern to pick, but I found this little guy on Pinterest, and he kind of stole my heart. He looks a lot like Beazer, doesn't he? It's from a French site, but I am not sure which one. I need to finish him up, but he was a fun, cute little stitch that took me maybe 3 hours at most.  What do you think? I may redo him on a t-shirt for Babygirl for Christmas next year, but not sure.

I pulled another UFO out, from my Crazy January starts of 2011, and worked on that a little. It felt so good to get time to work on my stitching. I've missed it, I didn't realize how much. I know there isn't a really good alternative right now; the financial issues I spoke of a few months ago are starting to let up, but we won't be out of the woods til at least the end of the year, and what time isn't taken up with trying to earn money is spent trying to make up for the hours I spend trying to earn a living. But I have a plan and I am going to be a stitcher again, soon. And I will appreciate the gift of time more. 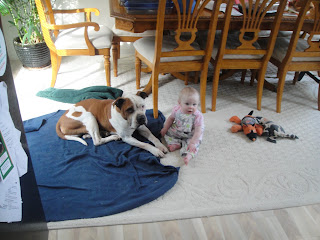 She's in love with her "puppy" now, pesters him incessantly. He puts up with her like a champ. I snapped this last week, the first good picture of them together.  My kids!

For Christmas, I got the idea that I wanted a cake pop maker. I got introduced to them at one of the bridal shows we attended (which are a waste of time, BTW, except for the cake), and have been wanting them ever since. But I didn't know you could feasibly make them at home--I figured you had to have professional equipment, like a melon baller, to do it, and I have a tiny little kitchen . . . and no melon baller.

So when I found out they make a cake pop maker, I was stoked. I looked on Amazon to see if they were expensive (they aren't), if they work (if you're lucky, they do) and then put one on my Christmas list.

Now is the time I admit that, had I done a bit more research, I would have figured out that you do not need a cake pop maker to make cake pops. The internet is full of sites that involve crumbling up cake, mixing it with icing and making balls. Somehow I missed these.

And I got the cake pop maker. We were going to fool with it the weekend Kaydence was baptized, but it requires vegetable oil, and I didn't have any, and the seven mile trek to Safeway was TOOO far. So it's been sitting, waiting, since then.

Yesterday, I got it out. I had time because the battery in my car died, so all my weekend plans were on hold til Left-brain got me a battery.  I have a Bella cake pop maker, and it came with cake mix to make the balls, otherwise, I'd have been breaking out the brownie mix I keep in the cupboard, for all the spare time I have to make brownies. I followed the directions. The maker smokes the first time you plug it in and turn it on, and they say to toss the first batch you make, which felt a little wierd, but I did it anyway.

It was not hard to use, once I figured out how much batter to put in the little holes, but, to be honest, what came out were more like doughnut holes than cake pops. They weren't very big. I didn't even bother to dip them in the topping, but we ate them just so. Chocolate in the morning, yummy!  I can see taking the maker camping or to the cottage and using it to make doughnut holes for breakfast. It would be a lot more fun, right?

And I just want to say, I am not ungrateful for the gift, and it was pretty easy to use, once I figured out what was going on, and got over the fact that a kitchen device was smoking. If it had been useless, I'd put it in the cupboard or never use it again. Left-brain was making fun of the cake pops while they were cooling, but he ate most of them while the game was on last night. I'm going to try to make the cake balls the right way, with the crumbled cake and icing, but I tried.
Posted by Rachel S-H at 8:01 AM 2 comments: Links to this post