I hadn't realized it had been so long since I posted. I really need to step up my posting. It's just been so busy here. We celebrated my daughter's birthday last week. Her birthday was on a Sunday, so we went to a nearby state park with a swimming lake and spent the day. Neither of the kids wanted to get out of the water, even to eat lunch and dinner. I mostly spent the day under the awning, watching them. And then, somehow, managed to fall over a beach ball and jack up my ankle. It has been two weeks and it is finally starting to not hurt so much. Though, driving is not a pleasure. Last Monday, we had to help my beloved cat, Gus cross the Rainbow Bridge. Mom has had him since I moved in with Left-brain; we didn't want to take him away from his siblings, and Left-brain has cat allergies, and had the dogs, and it just didn't seem like the best choice for him to be with me. I agonized over the decision, but he was happy with my mom and he was still mine. He was 20 years and a month old, and had not been doing well for a while. It was his time to leave us. He was quiet all day, but when he felt I was near, he perked up and "talked" to me. I told him it was OK and thanked him for being mine for so long. I was 22 when I got him, and he was wonderful; I was the luckiest girl in the world to have him as my first great love. His little paw-print is in our china cabinet with the Fenton cat my gramma had painted to look like him, and I found a little ginger tabby figure today to put next to his ashes when they come home. But on to nicer things.

I ended my Stitch Maynia shortly after the last post.   I had 3 finishes during the month of May, and then have finished two more since then. First, my finishes 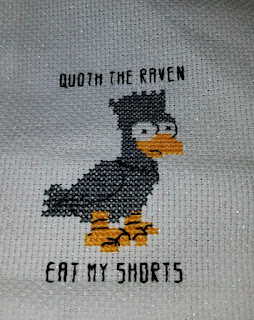 This was from an Etsy seller. I plan on just making him an ornament to hang with the other Halloween ornaments. I think I am going to spend September finishing things. It would take up so much less space that way. I was digging around in the garage the other day and found some of my finishing stuff, so it's a message to get started, right? 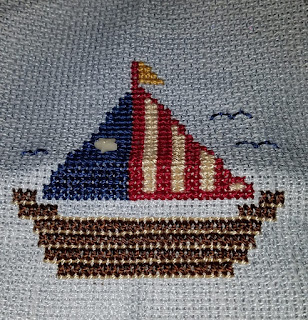 This little boat was in my stash. I think someone either put it out at stitching group or it was an inheritance from my friend, Enid.  I forget who it is by and it was not the easiest finish. I have visions of it on top of a painted box, maybe to hold some of our seashell collection? 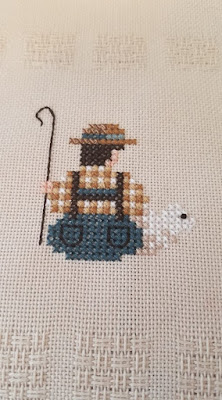 This  little guy was from the book of bookmark-sized charts by TIAG. I want to do several of these as an afghan. He is on a little scrap of some king of afghan fabric. He is super cute, but I am not pleased with how his butt looks. I know  . . . but it just looks like he is wearing a diaper. He will still be a cute little ornament!

Another Stitch Maynia finish. I am totally and completely in love with how this turned out. I planned to originally stitch it as I watched Southern Charm on Bravo, but it was too much fun to put down. I enjoyed learning about the houses while I was stitching it--the house on the right was originally built so that it would be the first house ships saw as they entered Charleston Harbor, and then the other two houses were built. Can you imagine! That probably made for a few awkward interactions at parties.  I have fantasies of having a South Carolina wall and this will be the start of that. I may try to see if one of the craft stores here has a decent rectangular frame for it. 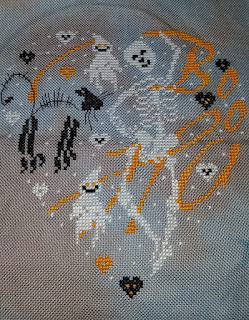 After all the starting, I just wanted wanted something somewhat simple to work on for a while. I won this fabric on Ebay back in the day when hand-dyers used to do Dutch auctions on Ebay. Do any of you remember those days?  They were great to build up hand-dyed stash. This was by Dovestitch. I haven't used a lot of what I bought as it was random small offcuts, but this worked so great to bounce the bright hot orange off of. The chart has been out there a while. It's a freebie on Casa Cenina's website. Not the easiest chart layout, but I love how it turned out.
I pulled Summer Ball out again last week, along with Shores of Hawks Run Hollow. I haven't really worked on this since last summer. I just got burnt out on it, and, TBH, it reminds me that a lot was done when I was unemployed and I hate that time. But, I really would like to at least get this section and all the backstitching done by the end of the year. Once I get past these men, it's all pretty linear from here to the end. I hate to say it, but I HATE stitching on these guys. This one looks like he has a porn 'stache, which is neither comforting or period appropriate. It's just a lot of fiddly stitching. The women are much more fun to work on, but I actually love working on the architectural details of the project the most. I really want to see this done and up on the wall. 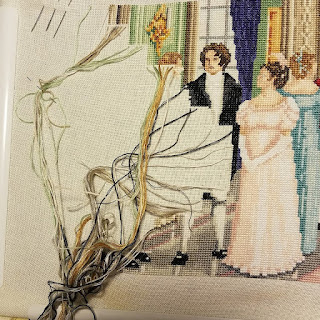 I am starting to think about my stitching for next year. If I get decent progress on this (and, who knows, I might end up getting a fire under my butt and finishing this, LOL.), I think I want to spend the year stitching Halloween and autumn charts. Imagine spending the year using those rich rusts and oranges, wines and purples. I have one project kitted up that I just tossed a bunch of left over fall floss in and will improvise as I go along. Doesn't that sound fun!!!! I would be in heaven, I think.
﻿

Rachel, I am sorry that you had to put your cat down. Your finishes are all super. It sounded like you had a good outing for your daughter's birthday. Enjoy the coming week!

Loads of gorgeous stitching :) I am so jealous of how much you have got done xx

Condolences on the loss of your kitty, Rachel. Glad to hear your ankle is getting better. That's a good sign. :)

Nice stitching finishes. I really like the boat, too. I have a box finishing tutorial on my blog, if you need one. I also like your TIAG finish.